Revival of a Gold Rush Icon

St. James in Sonora, the oldest Episcopal church building extant in California, is one of the iconic buildings in this Mother Lode city, with a commanding site at the south end of the main stretch of Washington Street which forms the core of the city, the county seat for Tuolumne County. Bishop William Kip, sent in 1853 from New York to be missionary bishop for California, traveled from his base in San Francisco to the Motherlode the next year, officiating at services and founding parishes in Gold Rush towns including Marysville, Nevada City, Grass Valley, and Mokelumne Hill. Another missionary, the Rev. John G. Gassman, founded St. James Parish in 1859 and the building was completed in 1860—but it was not officially consecrated until 1870. It was designated a California State Landmark in 1934. The building literally sits on Sonora’s history, with an abandoned mine under its basement. Over the years, it has seen many changes, including the decline of the gold mining which prompted Sonora’s founding, a fire which destroyed its roof and threatened the rest of the building, and a schism which briefly removed it from the Episcopal Church.

The building was expanded at least twice over the years, with significant interior alterations. Originally, the building had a wood shingle roof. By 1934, the wood shingles were replaced by metal shingles. These factory-made “tiles” resemble the traditional stone or clay roofing materials they mimic, but are far less expensive to build and install—and much lighter. Coated under controlled conditions in a factory, metal shingles typically have a very long life even though they are made of sheet metal which can rust under adverse conditions. After a service of at least 50 years, the metal shingles on St. James were beginning to rust and the building experienced roof leaks. A member of the community generously donated a gift large enough to pay for re-roofing, and the parish proceeded with the job.

The roofing project included replacement of the existing metal shingles with new ones matching in size and nearly identical in color, profile, and face pattern; installation of continuous plywood (over the building’s original skip sheathing), blocking, and connections to tie the roof diaphragm to the walls; and application of a self-adhering waterproof barrier over the plywood and under the shingles. The project also included repairs to trim, gutters, and downspouts. Knapp Architects served as architect for the project, working pro-bono to help this parish, which provides many community services in addition to its work as a house of worship. Ron Sneddon, Bishop’s Warden for St. James, led the committee for the roofing project and acted as project manager for the parish. Rick Ransom of Brooks Ransom Associates of Fresno was structural engineer, and Jason Kolb JMK Roofing of Soulsbyville was the contractor. 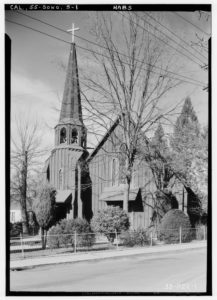 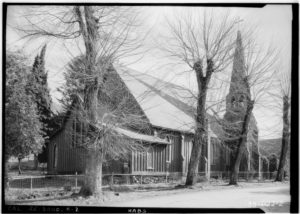 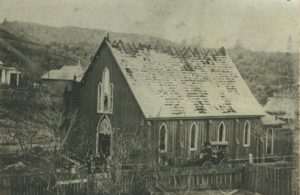 Left and center images from 1934 by Roger Sturtevant show the main (south) façade of the church and the west elevation of the church from Snell Street (Photo Credit: Historic American Buildings Survey). St. James has carried on for almost 125 years but, as the right image shows,  it was almost lost to fire long ago. (Photographer unknown.) 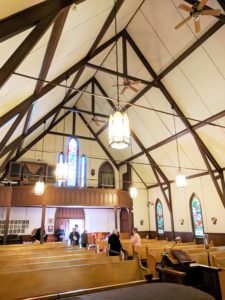 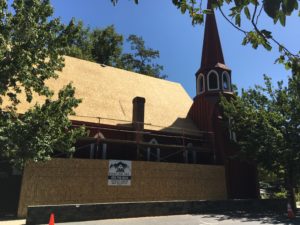 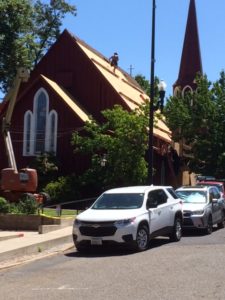 Although the exterior of the church shows little change in almost a century, the interior finishes in the left image have mostly been replaced more recently. The center image shows the construction-phase view from 2019 when the new plywood that was added to the original skip sheathing to upgrade the roof framing into a diaphragm that can help the building resist lateral loads. In the right image, roofers begin to apply the self-adhered waterproof membrane on top of the plywood. This product gives the roof an additional layer of protection from leaks. 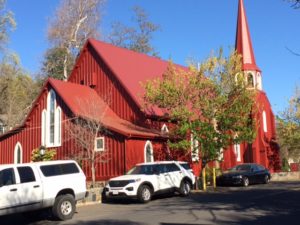 After the roof project was completed, the building was also repainted. (Photo Credit: Ron Sneddon)